What a cracking weekend it's been. Winter apparently. I woke to a beautiful day, and resolved to get out for a fish. Tide wasn't high until the late afternoon, so I rang a mate and teed up a 2pm session at Middle Head. As soon as we'd organised it, the weather turned, with messy showers and southerly winds. Thankfully we went anyway, the conditions weren't great and the wind was a bit in our faces, but there were a few fish around to make up for the conditions. 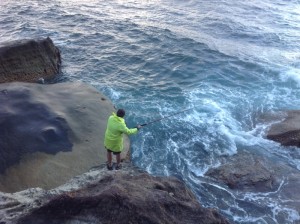 We fished up nice and high out of the swell, but the bumpy and overcast conditions were in our favour. I had a down first cast and pulled a small luderick out, which went back. Next cast saw another down, hooked and landed and kept this time. Another couple of the same size were landed, then Tham landed the fish of the day, a solid fish in the very high thirties. We ended up with 7 fish kept, a few throwbacks and fished for around 2 hours all up, not a bad afternoon in ordinary conditions. 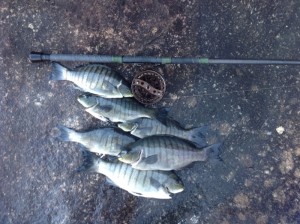 As always small baits of cabbage worked well and presentation had to be spot on. Really though the conditions although difficult for casting, made life easy with the low light and the churned up water making the fish bite freely. Tham fished with a Snyder6144 and a 2500 eggbeater and braid with a 10lb trace, I fished with the GP3145G and an okuma centrepin with 10lb Dango Wax and 6lb trace. A great afternoon of rock fishing, even if it did turn out that winter arrived.